There are so many sayings about animals, some of which date back centuries. But have you ever wondered what they mean and where they came from? Well, straight from the horse's mouth, Scallywags lets the cat out of the bag on a few ...

Meaning: being too nosy or inquisitive can lead to unpleasant repercussions or situations.

Originally, this proverb was 'care killed the cat' and was a warning about the effects of worry on wellbeing, using the cautiousness of cats to illustrate. Over time, 'care' became 'curiosity'. The expression is first recorded in a Ben Jonson play of 1598, Every Man in his Humour.

Barking up the wrong tree

Meaning: making a mistake or wrongly assuming something.

This saying goes back to dog hunting in the early 19th century and alludes to dogs in a hunt barking around a tree in which they mistakenly think their quarry is hiding.

Gone to the dogs

In times long gone, when dogs were less of the pampered pets they are today, any scraps or rotten food that wasn't fit for human consumption were thrown to the dogs to eat. In particular, horsemeat from old and knackered horses was used as dog food, hence the link to 'rack and ruin'. This was a well-established saying by the late 18th century but can be traced back as far as the early 17th century, quoted by Shakespeare no less!

Doctor: Therein the patient | Must minister to himself.

Macbeth: Throw physic to the dogs, I'll none of it.

Meaning: in trouble or out of favour.

There are two theories to the origin of this saying. The first, more prosaic theory takes a literal stance and alludes to putting a naughty dog outside in a cold kennel. However, we much prefer the second idea attributing the expression to Peter Pan author J M Barrie. In the story, written in 1911, the father of the family puts himself in the dog's kennel as punishment for letting his children be kidnapped (although critics point out that 'doghouse' is an American term while Barrie was born in Scotland and lived in England when he wrote Peter Pan).

Let the cat out of the bag

Meaning: to disclose a secret.

This is another expression with a couple of theories as to its origin. One theory is that the 'cat' is the cat-o'nine-tails - an archaic knotted rope device used to flog insubordinate sailors. The alternative idea dates back to the Middle Ages when cats were switched for piglets at markets - feral cats were abundant, whereas piglets cost a considerable sum, so letting the cat out of the bag would be to disclose the fraud. The first documented use of the phrase comes from a book review in a 1760 issue of The London Magazine in which it is lamented "We could have wished that the author had not let the cat out of the bag".

A popular though strange saying, no one really knows where it comes from. Of the more colourful theories, some suggest it originates from Norse mythology in which dogs were linked to Odin, god of storms, and cats were linked to witches who supposedly rode the wind. Others claim it hails from 17th century England, when the sight of dead animals caught in the debris floating down storm-flooded streets was not uncommon. In fact, author Jonathan Swift made note of this in his 1710 poem, A Description of a City Shower. While some say it stems from the Greek 'cata doxa' meaning contrary to experience or belief (ie. raining unbelievably hard) or the French 'catadoupe' meaning waterfall. 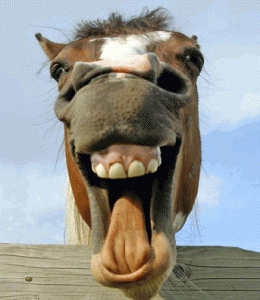 Straight from the horse's mouth

Meaning: from the highest authority or the direct source.

One line of thinking is that this saying comes from horse racing circles: that good tips come from trusted authorities who are closest to the horse (eg. stable hands or trainers). However, another explanation goes to old practices in horse trading for the origin. A horse's age can be determined from the size and shape of its teeth, and so any information about its age would be, quite literally, straight from the horse's mouth.

Meaning: a small alcoholic drink intended to cure a hangover.

The full expression of this saying 'the hair of the dog that bit me' gives more of a clue as to its origins. In ancient medicine, from Hippocrates to the Romans, there was the belief of 'similia similibus curantur' - curing like with like (much like Homeopathy today). In mediaeval times, it was believed that a bite from a rabid dog could be cured by placing a hair from the dog onto the wound (how you atually got the hair is not known!) So, in other words, this saying hails to the thought that the antidote to whatever ails you is a little more of the same.

Meaning: the hottest, most sultry part of summer.

Named by early Mediterranean astronomers as the 20 days before and 20 days after the conjunction of Sirius (the so-called 'dog star') with the Sun, this is the period when Sirius is brightest and rises alongside the Sun. This is also the time when the heat brought much discomfort and disease, hence the negative connotation to the dog days of summer.

More folklore than a saying, this stems from an ancient proverb:

It is thought this relates to cats' dexterity and apparent ability to always land on their feet, getting them safely out of situations that could be serious for other animals. While the number nine (sometimes called the 'trinity of trinities') is considered lucky, auspicious or even mysticcal in many religions and cultures around the world.

This article was brought to you by Scallywags Pet Care - based in Hurst Green and covering Oxted, Limpsfield, Westerham and the surrounding areas, we provide dog walking, cat and small animal feeding, and pet taxi services. Contact us now to see how we can help with care for your pet.

The Library of Congress, Everyday Mysteries

The Mirror, Cats have 9 lives: the facts behind the myth

Citizen of the Month, image

Quick and easy pest removal ... in just a tick!

The language of dogs: a ruff guide